We’re sharing everything we prepared in order to raise the house. From disconnecting the furnace, turning off the water, and the timelines for each step.

We’ve been sharing bits and pieces of our home-raising journey on IG, but I owe you a big update here on the blog. The Cottage Bungalow has some major things happening right now. It’s currently sitting 6 ft in the air because we are adding six more blocks to an existing basement.

In May we hired a contractor who specializes in raising cottages and submitted our plans to the city. It wasn’t until the end of July that we finally heard back from the city and got our permits.

But let me take a step back because we had a big list of things we needed to prepare before we were able to raise the house.

Preparing to Raise a House

Before we share more on the lifting process (and a video coming next week), I wanted to chat about the list we were given by our contractor, and the timeline we had to complete it. This was our timeline, obviously everything is dependant on your unique situation. But hopefully this will give you a better understanding of what to expect if you’re planning on raising your house.

We also planned on moving out at least a few days before the contractor came to do the preliminary stuff. So the kids were at the cabin and we just came back to the cottage to finsh all the tasks the day before. In a perfect world, it would have been easier to move out a week before and have this all done at that time. But it worked and this is exactly what we did.

Timeline: Start at least 4 months before

This timeline for permits really depends on your city or town. And my honest advice would be to give yourself extra time to check this off your list. We planned on having our permits in 27 business days (that was the timeline from the city planner).

You’ll have to include the drawings, revisions, and whatever else the permits might require.

Timeline: Around 1 – 2 weeks before

This is obviously something that was unique to our situation. We have a large deck off the back, which runs the entire length of the house.

In order to get prepped, we had to disconnect the ledger from the rim joist. And if you don’t know what I’m talking about, I’ll share the details in the picture below.

Once we disconnected everything we had to add some new joist hangers and support posts.
Also, this wasn’t something that was included in the cost and taking care of everything on this list ourselves, saved over $20k!

Timeline: Up to 1 day before

Call the electrical company to come and unscrew the meter box. It’s a simple task that you could do yourself if you can’t hire an electrician. In our case, we had to dig up the electrical line that’s encased in a black tube so when the house raises, the line lifts with the house and doesn’t pull out.

This also includes making sure the grounding cable has enough slack, otherwise we would have had to hire someone to change it or do it ourselves.

Timeline: Up to 1 day before

Disconnecting the water was easy. Tony shut off the valve on the hot water tank, while I turned on all the taps in the house, and we drained the water from the tank into the sub pump.

That also reminds me, we turned off all our appliances and cleaned out the fridge and deep freezer.

Timeline: At least 1 day before

Disconnect the sewer by cutting the pipe that’s in the basement. My dad gave us the advice to make sure we cut the pipe in the middle so we could easily add a connector to it once the house was finished. Which is better than replacing the entire pipe.

Timeline: One day before or when you move out

If there are any stairs that are attached to the house, you’ll have to remove them.

Tony and my dad only had to take the front steps off. We left the back since they were attached to the deck and not the house.

Timeline: One day before

Timeline: Depending on time of the year, 1 week to 1 day before

Thankfully we had our friend whos an Electrician come and disconnect the furnace and the air conditioning. Not only was he a professional and did this for a living, but this was great because he saved us a lot of money.

There were a ton of different pipes and lines that I didn’t want to mess with. I do know the air conditioning unit required him to somehow hold the freon. Which is something we weren’t capable of doing ourselves.

Timeline: At least 1 day before

Again, this is unique to our house and every home is different. But in our case, we had to make sure the internet cables were long enough.

Actually, you’ll see in the video I’m sharing next week, that the cable is barely long enough and iT has very little slack. So I’m hoping we won’t have to replace it.

But let me know if you have any questions either about preparing to raise the house or about the lifting process. We’ll be back to answer your questions and share the details, including the cost of this entire project next week. 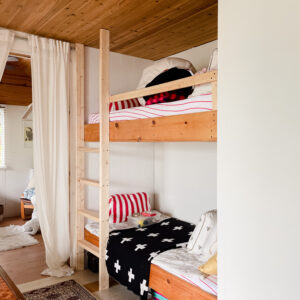 How to DIY a Minimalist Bunk Bed (Built-In) 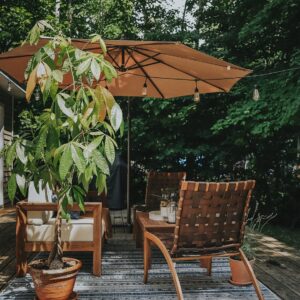 My Obsession with Leather Woven Chairs + 11 Other Favorites
Next

How to Create a Mood Board for Your Next Project

How to Create a Home Gym in a Small Space

A First Look at the Cottage Basement Floor Plans, Budget, and Timeline

The BEST Affordable Art for your Home

One Year Later: Do I regret Painting our Oak Cabinets?

Cozy season is here! And I’ve pulled out all the

Here’s the best career advice I learned from @ji

We all know that comfort is key when your travelli